My daughter loves Sesame Street. She knows a ton of characters, even if she can’t quite pronounce them all (“Tookie! Ahnie!”), and if we’d let her she’d have our living room television playing episodes and specials all day, every day, until the Elmo’s World theme song made our heads explode.

It is for this reason that my husband tracked down “40 Years of Sunny Days”, a special done a few years back that documented a bunch of famous scenes from over the first (first!) 40 years of the show’s life. I popped the show on the other day, partly for the little missy, but also partly because I was curious to see which of the scenes I remember from my childhood would pop up.

At one point – I believe it was somewhere in the “Years 10-15” section – a scene came on that I’d never caught when I was a kid because it was an old episode by the time I was watching. It was the episode where Mr Hooper dies and the adults have to explain to Big Bird about death. In the scene, Big Bird has drawn pictures of all his adult human friends and is passing them out as everyone oohs and ahhs over what a great job he’s done. When he comes to the end and asks where Mr Hooper is so he can give him his picture the adults go silent and look at each other like no one wants to have to be the one to explain it. They take turns explaining to Big Bird (“Don’t you remember? We told you that Mr Hooper died?”), who reacts with the same kind of misunderstanding, anger, and distress that a small child might. Eventually he comes to grips with what the adults are telling him and says that he’ll miss Mr Hooper, as he hangs the picture he’s drawn up at Hooper’s Store. 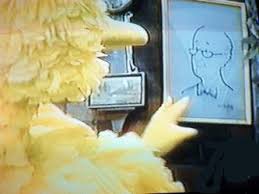 I won’t lie; I almost teared up. The baby, of course, had no idea what she was watching, but I certainly did. Strangely, though, the primary thought that was running through my mind as I watched the scene play out was, “How hard must it have been for the writers to prepare this scene?” Unlike writing the deaths of fictional characters, the writers for Sesame Street were writing about the actual death of a man they’d worked with, who had been on the show for many years and was an important part of the world which they’d created together. He wasn’t just a character, he was their friend. I can imagine it would have been even more difficult for the actors who had to perform the scene. In fact, one of the other actors, Bob McGrath, was quoted as saying, “I couldn’t go near the store for about a year after he was gone” and the scene in question was done in one take because the crew was too emotional after the first try to do another one.

The whole thing amazed me quite a bit because of how emotional I can get when my completely fictional characters are killed off. Even though these are people who exist only in my own mind, I’ve found myself nearly in tears when it came time for one of them to die. Maybe that means I’ve written them to be likable. Maybe it just means I’m a huge sook. Either way, it can be surprisingly difficult sometimes. I’ve even been known to fight with myself over whether or not I can change the story so that the character doesn’t have to die. It’s this attitude that is making it so difficult for me to figure out the (eventual) ending to my fantasy novel. Logic dictates that one of two particular characters has to die in order for the ending to make sense, but it kills me to do that to either of them.

Do other writers deal with this, I wonder? I mean, without the character in question being someone they actually knew?