I’ve gotten so many FaceBook comments so far on my daughter’s “Tickle Trunk” that I thought I’d share the process in case anyone would like to make one for their own child.

The back story of the trunk goes thus: I decided to get my daughter a bunch of dress up stuff (Disney princess dresses, discounted Halloween costumes, etc) for her birthday, and I wanted to get a cute container of some sort to put it all in. My husband insisted that we call it a “Tickle Trunk”, which for those of you who are too young to remember Mr Dress-Up is this. So I decided that I’d like my daughter’s “Tickle Trunk” to be an actual trunk…thus began the online searching. I checked all the toy stores, furniture stores, department stores, and even Ebay and Kijiji, but I couldn’t find anything that I both liked and was a reasonable price. After a few thoroughly annoying days, therefore, I decided to make my own trunk.

Step 1: Boxes!
You could probably use any like-sized cardboard boxes that you might have laying around the house, but I went out and purchased a three-pack of cardboard storage boxes at Walmart because I wanted something decently sturdy. The three-pack cost about $8 and I only actually needed two of them. After assembling the boxes as instructed I cut one side off of each of the two I was using and then taped the result together to make one larger box:

Step 2: The Top (i.e. the part that makes it look like a trunk)
This part looks a little difficult but it was actually quite easy. I used the excess cardboard from the two sides that I removed in the previous step and cut two identical half-circles. I then cut a few two-inch strips to create a frame, and taped the half-circles to the frame. In the picture it looks like everything is attached, but if you look closely my frame is simply sitting on top of the bottom of the trunk:

After taping the half-circles to the frame I took what would have been the tops of the boxes, taped them together, and bent the whole thing to create the top of the chest. A bit more taping and I had the basic shape of the trunk:

Step 3: A Bit of a Facelift
Obviously what I had at this point was not exactly attractive, so it was time to spruce it up. Painting it wouldn’t have worked very well because of all the tape, so I decided to cover the entire thing in Bristol board (a total of 6 pieces at $1 each). I chose pink because my daughter’s room is pink and purple. First I cut thin strips to wrap around all the corners, because I knew the pieces of board wouldn’t fit together perfectly and I didn’t want the corners of the box to be showing underneath. Then I cut pieces for each surface. Everything was attached with a hot glue gun (I already owned one, but for the record I used a mini one that cost $4 at Walmart, along with about $2 worth of glue sticks). When I was all done it looked like this:

At this point I would like to mention that you are probably going to want to cover the inside of the chest as well, because it’ll look pretty ugly otherwise, and if you do decide to do so you’re going to want to make sure it’s done during this step, because once the top and bottom of the chest are attached it’s a pretty damn large pain in the ass to maneuver inside that thing.

Step Four: Decorating!This is the fun part, at least in my opinion! I already had this sticky-back craft foam from another project, but for the record a pack of it costs about $7 at Walmart, or you can get non-sticky-back stuff at the Dollar Store for about $2 and just use the hot glue gun again. I wanted my daughter’s trunk to look something like the original Tickle Trunk, so I used my craft foam to cut a big butterfly and a bunch of different colored flowers. For a personal touch I make the butterfly pink and purple like her room, and also made a couple of ladybugs: 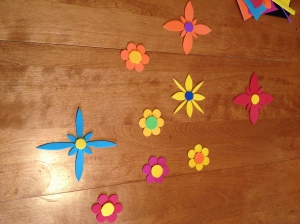 When I had lots of decorations I had fun sticking them to the chest, and here’s a dirty little secret: I used a couple of the flowers to hide places where I screwed up the Bristol Board a bit….shhhhh….

Step Five: Putting it all Together
In the last picture you may have noticed that there are little white knobs on either side of the butterfly. These are optional, but I added them to make it a little easier for my daughter to open the chest. They’re just a simple pair of drawer knobs that I bought at Walmart for $4. I had to swap out the screws (the ones that came with it were far too long for just going through cardboard) but it was super-simple to put them on…I just poked a hole in the right spot with a tack, wiggled it to make the hole bigger, and badda-bing badda-boom.
Then there was the actual attaching of the two sections of the trunk. Unfortunately I don’t have a photo of how I did the hinges, but it’s as simple as this: I cut three pieces of cardboard in the shape of hinges and covered them with the Bristol board so they wouldn’t be ugly. Then I lined up the top and bottom of the chest and hot-glued the “hinges” to both sides of the back, making sure not to get glue in the area where the two pieces of the chest meet. When the top of the chest is lifted, the cardboard hinges bend in the middle to allow the opening. It’s not the sturdiest of setups, but it should last for a good long while. However, to take the stress off of the hinges (and assure they they don’t rip off from the weight of the top of the chest, I also attached two pieces of ribbon to keep the chest from opening too far: 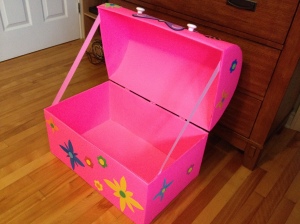 You can see the hinges a little there through the gap. They bend surprisingly nicely, and the ribbons keep the top from falling backward so nothing rips or tears.

Step Six: Enjoy!
All in all, though there were a couple of frustrating moments, I had a blast making this chest for my daughter, and it will be something special that only she has, made by mama. It took me about three days worth of work, and all total about $31 worth of materials. By comparison one of the cheapest chests I found in stores was $80 and was just a plain pale pink with no personality. Who would spend so much money on something so plain and boring when you could have this: 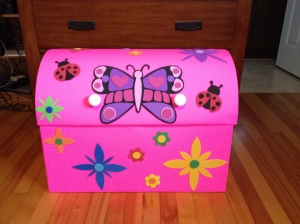 My homemade Tickle Trunk is now filled with all kinds of fun dress-up stuff, waiting in a locked room for my daughter’s birthday, and I can’t wait to give it to her. I hope she likes it as much as I enjoyed making it for her. 🙂

3 thoughts on “Tickle Trunk for a New Generation”