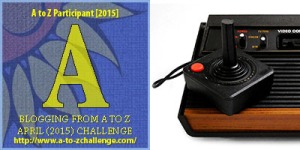 Since I chose to base my challenge this year around video games, I thought it only fitting that I start off the month by talking about the first video game console I ever owned: the Atari.

Now, I’m going to be honest: the history of this console is a little complicated, to the point that I’m not even 100% certain which version of the system it was that I had. The original console, as created by Cyan Engineering to be able to play the then four arcade games made by Atari Inc, was called the Atari Video Computer System, or “VCS”. Later, when the Atari 5200 was released, the VCS was renamed to the Atari 2600. A lot of selling off of rights and fighting between companies occurred over the years, and eventually the Atari 800 and 400 were created as well. The 5200 itself was unsuccessful because of a lack of backwards compatibility with 2600 games, as well as a small number of its own games.

Now, it’s difficult to remember because I was so young when we had the Atari, but based on photos I’m pretty sure that what I had was the 2600 model. My first ever game console had only four buttons on the machine itself – Power, TV Type, Game Select, and Game Reset – plus a slot into which one would insert the game cartridge. The controller was nothing more than a joy stick and a single big, red button. To look at it now you might wonder how much fun you could possibly have with such a simplistic system, but when I was a kid it was one of the greatest things ever. One of my favorite games was Mouse Trap, which was basically Pac Man with a cat and four mice instead of Pac and the four ghosts. Then there was the ridiculous (but addictive) Plaque Attack, which was a Space Invaders clone in which you played a tube of toothpaste trying to protect a mouth full of teeth from approaching burgers, sodas, and sweets.

And of course there was always PitFall, the game where you fed your little 8-bit man to ponds of hungry alligators (*ahem* I was never very good at PitFall).

If I seem a bit nostalgic it’s because I remember the Atari very fondly as a wonderful part of my childhood. Unfortunately when I eventually upgraded to my first Nintendo console my mother gave away the Atari system and I never saw it again. As a bit of a video game hoarder, this remains the only system that was a part of my life that I don’t currently still own, and that makes me sad. Someday I will reunite with this system and my old games, and on that day I will inevitably rage-smash PitFall against the wall because nostalgia can only take you so far.

Are you old enough to have played the Atari 2600? If so, what was your favorite game? And on an unrelated note, do you now harbor a deep hatred of alligators? Please share!

Enjoying the A to Z Challenge? Why not check out some of these other participating blogs: